How to teach English through arts and crafts 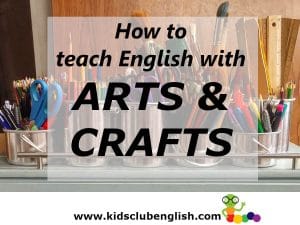 In the preschool and primary classroom, arts and crafts are going to be involved to a greater or lesser degree. But we’re language teachers, right? What place do these activities have in our classrooms? Are they just a chance for the teacher to have a break from ‘real’ teaching? In this post, I’ll discuss why, in my view, not only do they have a place, they are also an essential tool to help kids acquire and learn English in a more effective way. We’ll also look at some practical ideas for how to teach English through craft, focusing on pre, during and post craft procedures and the different classroom dynamics we can use.

What do we mean by 'arts and crafts'?

I take quite a broad definition. I consider it to be any structured activity that involves using the hands and other tools to create an end product. This basically means that there are steps the child has to go through. They need to use their hands to follow the steps, they’ll use tools (such as crayons or glue), and they’ll have something to show for their efforts.

So, in this way, even simple colouring or cutting and pasting activities are considered to be crafts in my classroom. While many people will think of more elaborate constructions as ‘real crafts’, as an English teacher, I tend to reserve those for special occasions such as Halloween, the end of term, or as part of an extended project. It’s not that I don’t think these more elaborate crafts are valuable. I do! But in my classes, I usually plan my daily crafts to consolidate specific language points – what I call ‘English through Craft’. With more time-consuming, elaborate crafts, my language aims are based more on classroom language and opportunities to explore unplanned language that comes up in conversation with the kids – what I call ‘Craft through English’.

What are the benefits of doing arts and crafts?

Research into child development shows that children benefit in a number of ways from doing arts and crafts. Below are some of the main ones:

Ok, but surely they can develop those skills in the rest of their lives, right? Why should we worry about them in the language classroom?! In my experience, crafts are really useful to teach English. These are some of the benefits I believe craft provides for language teachers and their students:

Here are our top tips for what to do before you start the craft itself: 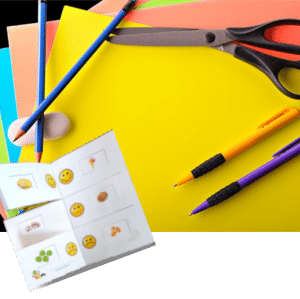 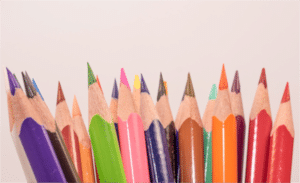 This is an area that I’ve given a lot of thought to over the years. When I first started out teaching young learners, it seemed like this was the stage of the lesson where the teacher took a back seat and the kids got on with it. I used to feel really guilty and wondered if it was just a waste of time, especially if the kids only had one to two hours of English a week. So, I started to think more about the purposes of this part of the lesson. Yes, it’s true that including the arts and crafts was valuable for most of the reasons given at the beginning of this post. However, I really wasn’t taking enough advantage of opportunities to recycle and consolidate target language or to practise functional language such as making requests and expressing opinions.

Below are some of the activities and techniques I started incorporating into the craft stage of my lessons. Now I consider this part of my lessons to be one of the most effective for language learning.

Create a need for request language – rather than giving the kids everything they need, create a gap (a need for them to communicate). You can keep crayons and other craft elements in a different area of the room or you can keep them yourself. They have to ask you for the items they need. Incorporate the vocabulary you want them to learn into this stage. For example, if they are completing a craft that requires them to glue pictures of target language items onto a scene or into a mini-book, get them to ask you for each item as they need it. If they are still unable to produce the language, you have the chance to tell them what it is again.

Give responsibility to the students – Once they are used to the idea of requesting the things they need, you can make different students the monitors for those items. This doesn’t just have to be the scissors monitor or the glue monitor. You could give each student a different part of the craft representing the target language. For example, if they are creating our daily routines board game, one student could have ‘brush my teeth’, another ‘go to school’, another ‘play with friends’ etc. In this way, the students are empowered to teach each other the language.

Include dialogue or roleplay – If you have been working on a dialogue in class, is there a way to incorporate that into the craft stage? For example, after reading Walking Through the Jungle with a group of 4 year olds, we completed a find and stick jungle scene craft. Together we repeated the chant from the book which finishes with them asking what the animal is. After revealing the animal (again using the story language), they went to search for the animal in a pile of cut-ups I’d placed on an empty table.

Another group of learners had been working on how to order in a restaurant. The craft was to make a menu by matching and sticking cut-up pictures of the food to the written words of the dishes. In order to do this, my students worked in pairs with one student being the waiter and the other the customer. The waiter collected the ‘food’ and ‘served’ it to their customer then they changed roles.

Add in a game element – You could have students play in pairs or groups with games they are familiar with.  For example, each group could have a set of mini-cards or flashcards of the target vocabulary. They could play guessing games with mime, spelling or other flashcard games. Once the group has guessed it, everyone in the group can complete that part of their craft. This would probably be too complicated for preschool children, but primary kids can give it a go!

Dictation – We’re all familiar with this one but it doesn’t have to be boring and it can certainly provide useful exposure to a lot more language than simple vocabulary items. It doesn’t always have to be teacher centred either. The kids can take control too. You might have to do a bit of supportive whispering though!

See below for variations on different dictation techniques.

With young learners it’s important to consider and plan the dynamics of the craft too. Think about the rest of your lesson and how the craft part fits into it. Young children can’t sit still for long periods, so is it time to let them move around a bit? Do you want to incorporate more individual interaction this time? Are the children ready to practise using the language as well as understanding it, or do they need to focus more on receptive knowledge of the language at this point? Children work at different paces too. Do you want to conduct the craft so that different children can go at their own pace or do you want them to complete the craft in lock-step? What possibilities does the craft itself offer in terms of dynamics?

Having considered all the techniques above, you might, however, decide to give the children free reign to complete their craft as they wish while you circulate and ask questions and make comments. This approach has its place too! My advice would be to avoid asking too many test questions, such as, “What is this in English?” Try to be specific and descriptive in your comments, rather than offering  generic praise statements. Rather than ‘That’s good’, try ‘I like how the bird is swimming. That’s funny!’ or ‘I like the blue fish’ or ‘You’ve coloured very carefully’. The children won’t understand every word but, combined with your body language and the individual interaction with gestures, they’ll get it. If it means something to them, they might pick up on some of the language you use too. 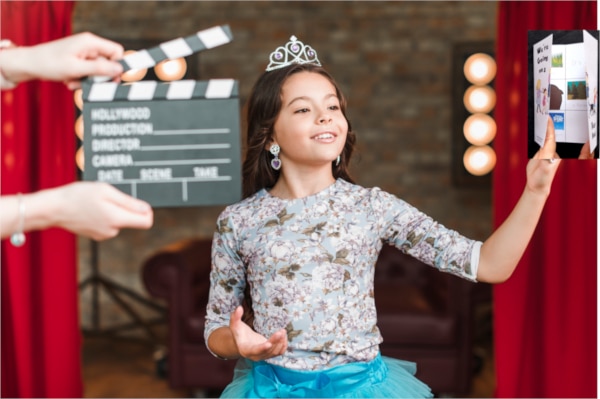 I believe every craft serves as a useful visual record of a child’s learning that can help parents bring the language outside the classroom. Apart from this, there are several extension activities you can do in the class itself. What you do with the craft after the children have completed it is very dependent on the craft itself. Below are a few ideas according to different craft types.

Play the game / spin the spinner and…

You could make any of the above activities competitive if you wish by having the children keep score of points for good sentences etc.

Other craft types that you could use some of the above ideas with are:

Arts and crafts activities do require a bit of preparation but it doesn’t have to be a lot. There are lots of simple paper-based crafts out there that your kids will love doing. Not only will they enjoy the experience, they can potentially learn a lot of language from it.

From my experience, it’s all about how you conduct the activity. Hopefully the ideas in this post, have given you a bit of inspiration for how you can exploit arts and crafts to teach English.

I’d love to hear any other ideas you have too! Leave your comments below.